Namaste (Sanskrit: नमस्ते, namaste) is a Sanskrit greeting and gesture of reverence, respect, and gratitude, performed with two palms folded together before one another. The gesture is used in everyday life to say goodbye and hello, and in worship, prayer, and spiritual practices. It is also an expression of one of the most commonly used mudras in hatha-yoga and https://www.julianalucky.com/post/mommy-and-me-yoga-benefits.

The polite greeting and sacred gesture of Namaste 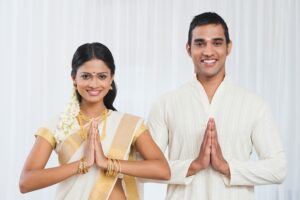 With this gesture, we salute the divine in man. God is omnipresent, he is the essence of the whole universe and is manifested in all things. Therefore, when we greet another person with this gesture, we honor the source of divine light, the spark of which is his soul that has shone forth in the manifested world in human incarnation. Thus, by making this gesture to a person, we honor the Higher Consciousness of which we are all a part. All being dwells in unity, which is the original source that gave rise to the entire manifested world, and to which all will return at the end of the cycle of Creation. Outwardly we are separate, but in essence we are one. This is what Namaste means: “The divine in me recognizes the divine in you. Therefore, by the gesture of Namaste, we honor the one divine essence in ourselves as well as in the other person.

Anjali mudra is a gesture of greeting and reverence that has the same meaning as the Namaste greeting. Mudras are used in spiritual practice to activate certain energies or help establish a connection with the deity, they are a kind of sacred formulas that form the realization of a certain intention, be it protection, healing, blessing, etc. That is why mudras are used not only during ritual sacred acts, but also in classical traditional dances and yoga. Like any mudra, the Anjali mudra is accompanied by a mantra or sacred phrase, in this case, Namaste. “Anjali” (अञ्जलि, añjali) means ‘divine offering’ or ‘blessing’ and “mudra” (मुद्रा, mudrā) means ‘sign’ or ‘seal’. Thus, Anjali mudra means ‘sign of divine veneration’.

It is believed that when you put your hands together, it balances the activity of the right and left hemispheres of the brain, so this gesture sets us in a harmonious state, balances, calms the mind, increases concentration, concentration, which brings us back to the moment of “here and now”. Therefore, any hatha yoga practice should begin with this gesture.

In India, Nepal, Bhutan, Burma, Thailand, Laos, Cambodia, Indonesia and Sri Lanka, people greet each other with the Namaste gesture regardless of age, gender or social status.

Namaste is performed with folded palms, fingers held together (not apart), pointing upward at the level of the heart in the center. The gesture is accompanied by a slight bow, in which 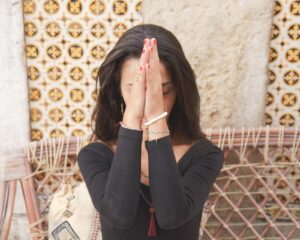 What Namaste means when performed from the heart (at the level of the Anahata-Chakra) is the activation of the heart center energy, which manifests itself in compassion, love, devotion, service, and friendliness. By the gesture of Namaste at the heart you address to people who are on the same level with you. This is how we develop the qualities of humility and gratitude.

At the level of Vishuddha Chakra, the energies of the throat center are activated, which manifests in service and active compassion. By folding the palms of the hands in Namaste at the throat chakra, one expresses reverence for elders.

From the Ajna chakra, the center of Knowledge, where the mind reaches the state of non-dividedness and the Truth of Being is grasped, we salute the wisdom of the teacher and instructor, the Guru, who guides us on the Path of spiritual development with the gesture of Namaste.

What Namaste means is performed by joining hands above the head (at the level of the crown chakra), where the connection with the Higher Consciousness is activated and pure bliss in the Spirit is attained – this is an expression of the highest reverence for God.