This technique and https://www.julianalucky.com/yoga-for-kids has helped me a lot with lung inflammation.

A variation of Matsyasana. Case in point.

While climbing Kilimanjaro, I got pneumonia. Quite acute form with cough with blood.

The MRI picture was discouraging. The doctor said that the case was serious, home treatment was very desirable, and recovery would take at least a month. 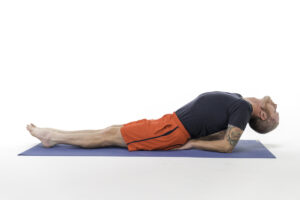 A week later, when I saw the second scan, the pulmonologist was a bit dumbfounded and said that this was the first time he had seen such a rapid recovery. What were you doing? The lungs still need to be worked on, but he is calm about the pneumonia now.

Of course, there was not only “yoga”, pharmaceuticals were also present, but the techniques of yoga, or rather even their right combination, have played a significant role in the recovery (soon I will publish an interview where I will talk about this case and practice in detail).

And now back to the effects of Matsyasana.

As a result of the flexion, the lungs are well stretched and open. It’s possible to activate the alveoli by full breathing, to “ventilate” the lung tissue better.

This technique is very useful for city dwellers, because it compensates for shallow stress breathing, helps to get rid of stagnant gases in the lungs. 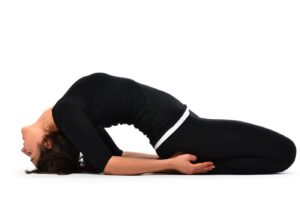 It is also recommended that people who sit a lot at the gadgets should do Matsyasana regularly to get rid of stooping. To have a stable effect, practice at least three times a week. Hold the position for 1 to 5 minutes. Breathing is full from the belly to the collarbones, and as smoothly as possible. Focus on the center of the chest or on the smoothness of the breath.

Above are two useful actions of this technique in terms of physiology. But you should always remember that in hatha yoga, physiology is secondary! It’s always your mental attitude toward life and energy that counts.

Asanas, mudras and pranayamas primarily affect the movement of internal “currents” in the body. And the functioning of these “currents” and the chakra system determines the state of the physical body. But this is a separate topic.

P.S. But most of all the support and love of friends contributed to the rapid recovery. So, despite the fact that yoga makes us self-sufficient, it is very important to communicate and appreciate friends!