By determining the leading channel of perception of information of a schoolchild, it is possible to greatly facilitate the process of learning. If we are talking about a preschooler or a primary or secondary school student, the conclusion about the predominance of one or another channel of information perception is made as a result of observation. The teenager or adult is offered to take special tests.

How to recognize a kinesthetic learner activities?

Behavioral features that “give away” a kinesthetic:

The child’s vocabulary is dominated by words describing feelings or movements (cold, touch, hard, grasp). There is a strong emphasis on inner experiences in conversation.
This baby simply adores pets. He is constantly touching them: stroking, carrying them in his arms.
He loves bodily and emotional comfort. Dressing him in a scratchy sweater is almost impossible.
During a dialogue, he does not look into the interlocutor’s eyes, but downward. At the same time, he makes a lot of movements and gestures and tries to get closer to him. He could even start twisting a button on the other person’s clothing.
During conversations, she constantly

changes her posture. His favorite position is with his or her arms around himself or herself, and his or her legs are tucked or intertwined. Often slouches and walks with drooping shoulders.
Demonstrates a tendency to be silent. Sometimes such children seem shy and timid. This opinion is erroneous, just guys are lost against the background.
Often relies on his intuition, which is developed very well.
Such children find it difficult to concentrate. They are distracted on any occasion.
The child clearly remembers the general impression.
Memory is turned on during movement. The student, listening to the teacher, can not even look at him, but his fingers over a pen or pencil.
If you need to rewrite homework about present simple from the board, the child will rummage through his or her briefcase for a long time. He will most likely take out his textbooks and mark the necessary numbers directly in them.
His notebooks are unkempt: they are covered with stains and wrinkled. The desk is a mess, which the student navigates perfectly.
He uses recess to stretch and move around.
The schoolboy masters his body extremely well – he has excellent coordination of movements, he is flexible and agile. He has a strongly pronounced propensity for sports.
He has a tendency to manual labor.
Teachers have a hard time with such children. They call them “hyperactive”, “unlearnable”. A kinesthetic child who is forced to sit quietly will after a while start tapping his/her fingers or moving his/her feet or something like that. If the child is treated incorrectly, 90% of the teacher’s effort is wasted.

The problem of the wrong approach to a child, when their way of absorbing information is not taken into account, is quite profound. Specialists say that such children cannot be expected to solve a problem quickly or to immediately repeat the material they have heard.

For example, kinesthetic students take a long time to count on their fingers when their classmates have already begun to solve examples orally. This becomes a big problem for children. They try everything they can think of to hide their “failure”: they hide their hands under the desk, behind their backs, and tap their fingers on the table top. Children need a completely different attitude and patience from their teachers and loved ones.

According to some professionals, all children are kinesthetic. This point of view has a right to exist, because all children of preschool and primary school age are very mobile and emotional. Later in most children, the dominant channel changes to visual or auditory.

How to deal with kinesthetic children?
Children who experience the world in a tactile way find it difficult to absorb a lecture or a verbal explanation from the teacher. Teachers have to repeat the same thing many times, show illustrations. Shouting has no effect on such schoolchildren.

You should not rush and hang on the child a label “a failure student”. The teacher has to figure out how to work correctly with kinesthetic children.

Recommendations for working with kinesthetic children
It is very difficult for a child to sit still for a long time. It is necessary to give him or her motor release. He can go get some chalk, write adjectives that start with i on the board.
Two people will understand each other by speaking the same language. It’s the same with kinesthetics. They will be helped by gestures, by touch, by their typical slowness of thought operations.
Such students learn through memory. Exaggerations contribute to memorization.
The child will respond to the teacher’s remark if it is accompanied by a gentle touch on the shoulder.
Will better perceive the material that has been written down.
Practical activities (constructing, experimenting) are the most productive activities in the lesson.
Physical activity is important to the student. The more effort he puts in, the more successful he will be in other areas of life.
The kinesthetic learner acts, tests, and analyzes. He learns by memorizing algorithms. It is important for him to understand what this or that rule is for. What good is a theorem? How will it help in life? Working with kinesthetic children, you have to give them answers to these questions, to show them the practical use of the material they are learning.

Under no circumstances should other channels of perception be neglected. They should be involved to the maximum. It is important to have patience and explain all the same, and show them again and again. The effectiveness of the learning process directly depends on the number of open channels and the level of their development.

How should parents act?
A lot depends on the parents’ line of behavior. Failure to understand the child will lead to conflicts.

The child will cope with homework in a comfortable environment. If he is forced to read or learn a poem “as it should be”, after a while these activities will only cause hatred. Monotonous cramming of math will not work. 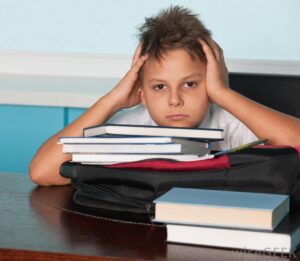 At home, you can not force a kinesthetic to sit still and do homework. He needs a break: let him put the kettle on, give something from another room, look out on the balcony. It is easier for him to remember the material this way: in portions, while he is moving.

It is difficult to study the exact sciences with a kinesthetic, but there is a way out. Let the child cut out as much as possible from paper: numbers, signs, unknowns, even formulas. If the student is holding something in his hands, it is easier for him to understand the subject at all.

Any images can be connected through associations. A paper appliqué will remind you of the material you have learned. The question “What did we learn when we cut out the car?” triggers the mechanism of associative thinking.

A kinesthetic will not learn a verse if he just sits and reads it. When he takes something to twirl in his hands, starts sculpting or drawing, the result will be quite different.

A child with a kinesthetic anchor channel is helpful:

Have a set of materials for different crafts, experiments, hands-on activities at home.
Read large encyclopedias where he will find many answers to his questions.
Watch educational films and shows.
Go to exhibitions, museums, go on excursions.
Kinestheticians find it difficult to cope with stress and discomfort. They are completely immersed in their experiences. It is important for parents to talk to their child more about their feelings, to find out the source of their anxiety.

As difficult as it may be with these children, they have one huge advantage. They are little people who are open to the world, interested in everything. They trust those around them, charging with positive emotions.